The COVID-19 crisis has turned the music world upside down leaving our artists in an extremely vulnerable position. Performance venues have closed, forcing musicians to reimagine their work lives with an unprecedented immediacy. At Young Concert Artists, we are determined to help our musicians make the most of this extraordinarily difficult time.  Until we can get them back on stage, we must Keep Our Artists Working!

In the early stages of the crisis, YCA was able to redirect a small amount of the current budget and offer emergency relief grants for those artists most in need. Since then, we have started new online performance spaces to replace the many traditional venues that previously provided our artists with income. We are excited by the results so far and look forward to developing our initiatives more fully in the months ahead.

The Keep Our Artists Working Fund supports this next wave of innovative music-making.  Our artists are getting creative with new collaborations, new models for interactive educational residencies, performance videos, interviews, and more. We want to challenge them to keep working through project grants, mentorship, technology support, and studio time.

Thanks to our generous New York and Washington, DC Boards, a special gift from Mrs. Katharine Rayner in memory of Alexis Gregory, and a wonderful group of enthusiastic patrons, we not only met but exceeded our goal to raise $150,000 in support of the first three months of our Keep Our Artists Working Fund!

Our campaign will continue until we can get our artists back on stage which may not be for at least another four months. If you haven’t made your donation yet, there’s definitely still time!

Young Concert Artists has been there for each new generation of brilliant young musicians for the past 60 years.   Join us with a donation of any amount to The YCA Keep Our Artists Working Fund.

Together we can make a difference.

YCA is thrilled with the results so far! Your support has made projects like this possible: 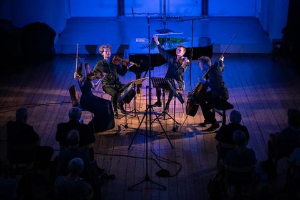 From cellist Jonathan Swensen: a chamber music festival called Festival & Friends was created with the intention of bringing together some of Jonathan’s closest friends and colleagues in the wake of COVID-19 to gift music to the community of Copenhagen when all other live events were cancelled. Ten socially-distanced concerts of 30-50 people were held over the course of five days in July, with performances of works by Schubert, Debussy, Beethoven, Dvořak, and more. Jonathan partnered with various media outlets to broadcast the performances world-wide. The Violin Channel recorded one of the performances on July 13, which may be viewed here.

YCA is excited about the future!   Your support will make more projects like these possible:

“YCA is doing an incredible job of taking care of me during this difficult period!”